Remain, Intervention of a vacant lot within the layout of the former AU3, corner streets: Holmberg and Mendoza. 2010 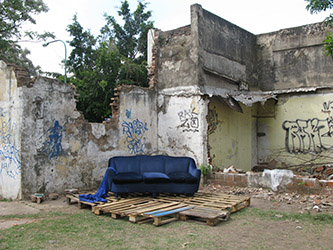 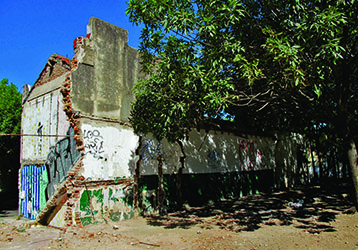 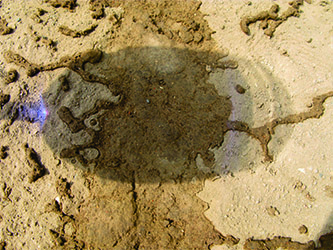 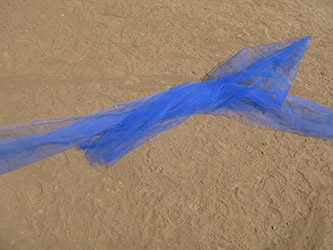 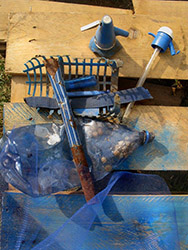 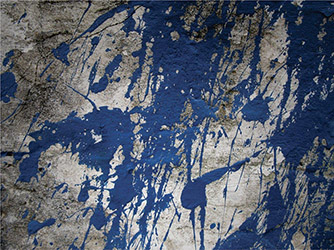 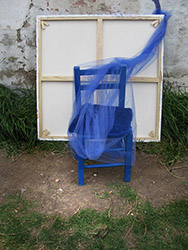 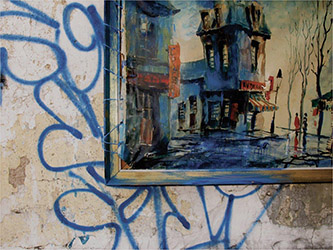 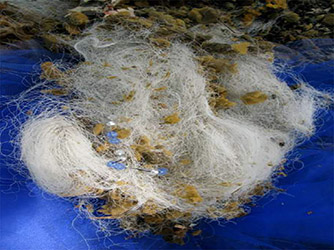 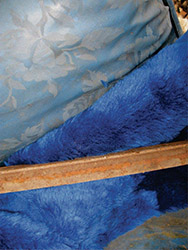 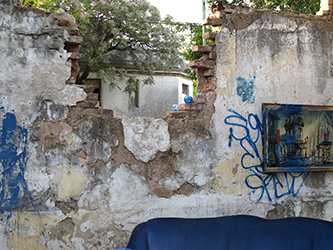 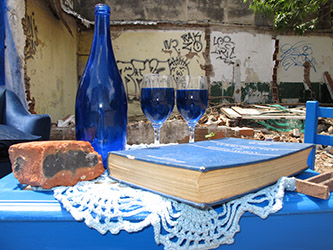 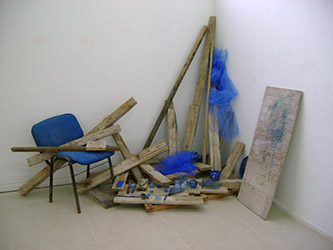 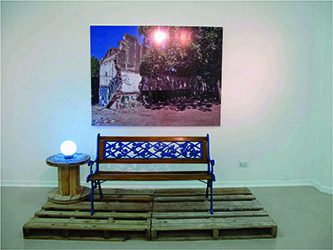 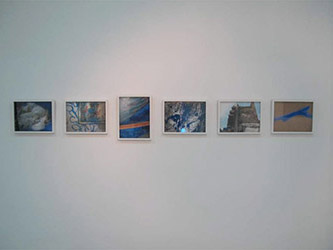 Exhibition "Remain", Lebensohn Foundation, 2011
Given the necessity to intervene one of these residual spaces, Remain arises: the reconstruction of a homey space planted in one of the vacant lots of the highway that wasn´t constructed. A sumptuous and worn blue chair on its palette floor, presides for one day an urban site. Klein blue color, color of the spiritual, a-tectonic color, contrasts with the ruin. The installation becomes a performance when it is circulated by the people from the houses that were taken in the neighborhood. The political reality wanted to participate synchronically with this action: during that week, history highlights the land appropriation in urban park of the city, the national census and the death of a former president. Immediately the wastelands of the area were fenced.

Today, institutionality and the real estate businesses re-appropriated the layout transforming its meaning into a space of use again. The photographs taken at the Remain intervention were use for the exhibition at the Lebensohn Foundation, resulting in a display enriched by other formats.

REMAIN, by Danielle Perret, 2011
Here is a complex "scenography" (according to the artist's denomination), a set of works that each entails a plurality of meanings. Perhaps, what first is perceived when entering into the interior of the space created and organized by Rita Simoni is a series of tensions between works and objects that refer to concepts, to opposite contents.

Interior space / exterior space: the armchair that can be seen in a large-scale image is the classic, conventional furniture of the living room; no other furniture evokes the core of the home better than this one; It's like a symbol of family life. But there, in the photo, it is placed outside, in the open air; instead a bench, those which are seen in the squares, is placed in the interior ... before the photograph of a wasteland.

Real world / imaginary world: very concrete objects (of plastic, of wood, found in the street), without any transcendence, coexist in this scenery with poetic creations such as, for example, the blue monochrome, painting offered by the imaginary space, infinite, of sensitivity. You can also see in one of the walls of the room a large size drawing that shows a succession of corridors and rooms of sumptuousness from another era, opening towards a sophisticated space without limits. The blue curtains have two simultaneous functions: a physical one, by its evident concrete presence and the other clearly symbolic.

Place / no place, place with memory / without memory: the particular history of this place of Buenos Aires is one of Rita Simoni's works; this area was demolished during the military dictatorship, with the project, never developed, of building a highway. So the place was finally left, at the same time, without houses and without highway, the only thing that remains until today is the result of the demolition, that is to say an empty space, stripped of its memory, a "deconstructed place", according to the words of the artist, but that, still destroyed, remains...

In other times, the definition of spaces, by the artists, was clear: outdoors (landscapes, etc.), interiors (still lifes), sometimes half-exterior or half-interior (for example, the scene of the Annunciation to the Virgin). The reflection on identity, the nature of space (we refer to space in general) that appears in Rita Simoni's scenery shows a characteristic concern of our contemporary times, as expressed by, for example, the American artist Gordon Matta-Clarck, with its buildings cut in half ... Or also the conception (in the French gallery Xippas), of a work where young artists recently participated, placed in a room which can never be seen, which exists without existing.
"La chambre est pensée comme contre-espace" ("The room is designed as counter-space") says the text.

A series of previous works by R. Simoni, the series Residual Spaces (medians), already announced the reflection that she develops in the scenography: the interior, exterior space, the traces of past times, of memory ... The works of the medians are composed of two parts: in the left half of the surface you can see the photo of a wall that was originally - at least partially- inside the building. Remains appear traces, of interior environments such as kitchens, bedrooms, etc. But the paintings of such a room, the tiles of a bathroom, are now outside, for all to see, in the open.

The other half of the work shows a square of a single color in tune with the dividing wall: a monochrome. They oppose the monochrome that could be defined as the most pure and absolute expression of the essence of the painting and the representation of the dividing wall, that is to say a wall, physical reality, material, only material, stripped of its function of dividing and of all its symbolic function.

We also see an important monochrome, of large dimensions, blue, in the scenery imagined by Simoni. What could be the meaning of a monochrome here? The monochrome can be considered as the painting's "zero degree"; it has the specificity of transmitting the maximum of its potentialities as matter, as surface, as energy, as an event, but also as emotion and as a concept. Likewise, in the monochromes of certain artists the disappearance of the form is thought to enable an expression of the "sublime" that only color can manifest. What does a blue monochrome evoke?

Rita Simoni explicitly refers to the Klein blue, the famous IKB. As she herself expresses it, it's the color of the spiritual, of the immaterial, the most opposite to the tonalities of the construction materials. Klein shares with Malevitch Malevick (considered as one of the fathers of the "monochrome") this aspiration, this ambition towards the spiritual and the mystical.

Colors, more than a natural phenomenon, are a complex cultural construction. The blue color, in the western world, remained for many centuries without any relevance, without meaning in social life, in religious practices or in artistic creation. Its symbolic dimension was too weak to convey ideas, arouse emotions or organize codes and systems.

From the twelfth century, with the important development of the cult of the Virgin, when blue becomes its mandatory attribute, this color becomes filled with particular values; expresses, for example, a new conception of the sky and light.

Later, from the fifteenth century onwards, it adds a "moral" dimension (which blue shares with the black), which is translated particularly in the sumptuary laws and which will be accentuated with the Protestant Reformation. It is from the eighteenth century on that blue becomes a protagonist color. Not only corresponds to the poetic feeling of romanticism (German, in particular) - pure poetry, infinite dreams - but also, in a general way, it's a spiritual, moral, distant color, the color of progress, of the Lights, of the dreams, the liberties ... It's semantic field expands, points to the sky, to the sea, to the relaxation, to the infinite ...

The choice of Klein - in terms of the creation of the IKB - had of course no relation at all with hazard. In his works the French artist established a continuous oscillation between the two opposite poles of the material and the immaterial, the organic and the spiritual. The color blue is also the light, the space, as expressed in particular by his project (made after his death) to illuminate the Obelisk of the "Concorde" with this color. The repeated presence of a color reminiscent of the IKB in Rita Simoni's scenography underlines a strong tension between two opposing universes: physical, material and chaotic reality, and another world, the one of art, of sense, of open space towards overcoming the immanence.

Here, in the scenography, the encounter between these two poles is more significant than their mutual exclusion; in their different parts they oppose, but they also mix. The pieces of wood, which evoke the demolition, the destruction, are illuminated by a blue light. Our look, our imaginary, comes and goes from one record to another; there is no established and definitive place where our mind stops.

Finally, if we ask ourselves what is the feeling that prevails when observing, "feeling" Rita Simoni's "construction", it's precisely a "deconstruction", a fragmentation, a questioning, a reflection that embraces in a very contemporary way our perception of the environment and beyond our world.

This vision, at once creative and analytical, is understandable and logical in a current era which doesn't fit into a structuring time-space dimension. Our society no longer has a future conceived as a place of future happiness, a model to which we can aspire (as in the times of modernity) or as a past to commemorate with nostalgia. A present time without prolongation (the value of traditions has become aesthetic, emotional or recreational) and with a deficit in the representations of the future is - probably - destined to be lived as deconstructed. One could perhaps ask, as formulated by G. Lipovetsky, if the contemporary individual lives effectively in a state of temporary "weightlessness...