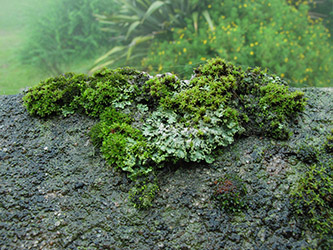 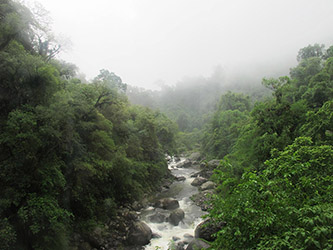 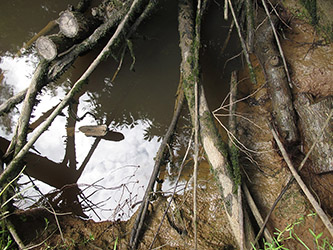 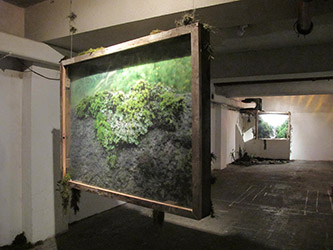 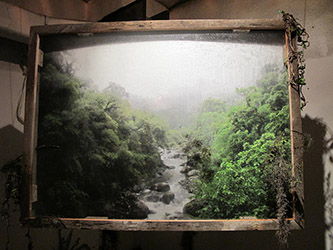 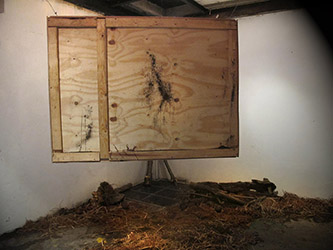 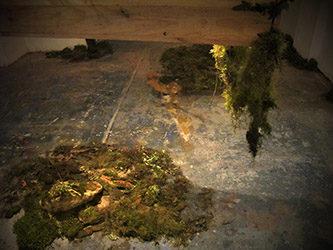 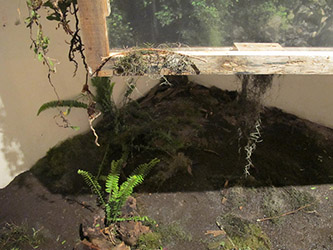 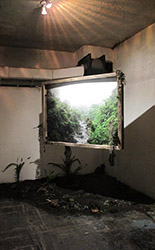 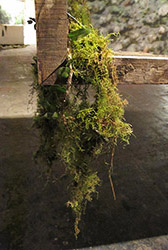 Site specific installation in Zafarrancho, a basement turned into an artists' workshop in Buenos Aires. The installation consists of three photographs of wetlands in Argentina, in rustic wooden frames, hanging from the structure. With plant material intervention related to wetted images, and permanent water sound in ostinato.

Humectaria is a site specific intervention in Zafarrancho, the basement of a building which became an artists' workshop, after it was rescued from a flood, which sometimes opens its doors to other artists to make exhibitions. A place without natural light which smells like humidity and the pipes are visible under the slab. Three huge photos of wetlands in rustic frames, from which nature itself emerge, hung at the corners of the space. The sound of water flowed in a permanent ostinato, almost like the evidence of subterranean waters.

Humectaria, by Rita Simoni, May de 2015.
Impregnated
Humectaria. Wet places.
Buenos Aires and its streams desecrated by the delirium of cement.
The Delta of Paraná, with its infinite tentacles inherited from other tropical forests.
The Yunga tucumana, producer of mists in the heart of the mountain.
Images that are memory of the landscape. Evasive capture that tries to eternalize the intensity of the experience.
Landscape that is a real and imaginary state.
Moved to another site, that when impregnated by the flood became art. Humidity, wetlands, humors.
Everything happens down there. There the sound is the splashing in the mud.
By entering blindly into the entrails of the earth, we appear circulating adrift through uncertain territories. There, the senses and emotions seem to amplify their power. What emerges transcends the limit, extends and spreads through the surrounding space, beyond the human will. And it grows.

Humectaria, by Maria Carolina Baulo, 2015
For years I have been following the work of the Argentinean artist Rita Simoni and I must confess that she continues surprising me. I think she's a clear exponent of that capacity which can't be discarded by the contemporary artist, related to the adaptation to the medium and the exhibition possibilities, making use of as many stylistic resources and supports as necessary.

Architect, photographer, visual artist. Her work can go from the two-dimensional plane to the installation format, from the artist's book to the 3D digital design. There are no limits to her work.

The Humectaria exhibition was presented in an unconventional space, almost unthinkable and even hostile. Zafarrancho is, literally, a basement that Simoni took completely to turn it into a kind of "cosmic portal" that transports the viewer from the depths of a dark place enclosed under the city, to the heart of the Argentinean jungles: the Paraná Delta and the Yunga Tucumana. A space voided as a basement since it is usually flooded, Zafarrancho presents moisture problems that are perceived as soon as the door is crossed and the spectator begins to descend the stairs. A first focus of attention is given by how the artist chose to play with the sensitive experience of smell as a preponderant factor. The heavy musty smell feeds the installation with an invasive presence. What a priori is a strange and uncomfortable feeling within an art show here it becomes the highlight of the exhibition. The spectator participates actively without even seeing the works, simply feeling the smell and listening to the sound of running water, as part of the ambience of the space. Once inside, in the presence of the site-specific installation, there are three huge photographs that dominate the scene: they represent the presence of the water-laden fog that overlies the jungle landscape.

Strategically distributed in the basement, each one of them is accompanied by a quasi-scenographic montage, where what is photographed materializes; a physical and vital presence that seems to leave the image and take the form of plants and other "living beings". The work brings us strange landscapes to the space that contains it but, at the same time, the photos recreate in situ the environment of its original state, the one that appears in the images. The wooden frames that seem to levitate suffer the corrosion caused in them by the water, they seem to rot. The photos transpire drops of water, the glasses fog, the water drips and feeds the weeds and the moss grows under each of the three images and takes the walls. Humidity generates life and life grows as the days go by, causing a different experience for the viewer from one week to the next because the environment changes.
An intelligent exhibition, designed for the place that contains it, enhancing the elements that can be seen as disadvantages and playing with all the resources available to transform them into wild cards: darkness and confinement, smell and cold, everything conspires to highlight the role of the photographs as real windows that make the spectator pass from one side to the other side of the frame, alternately. What we see in the image we feel in space with the five senses.