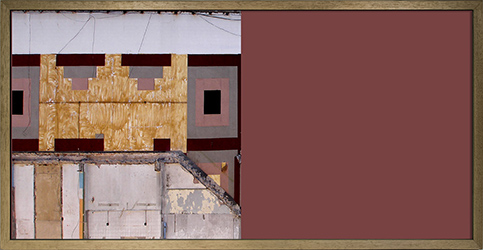 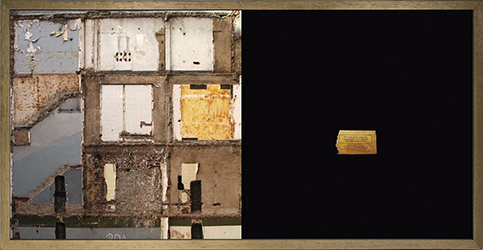 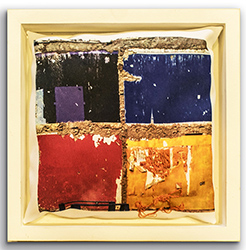 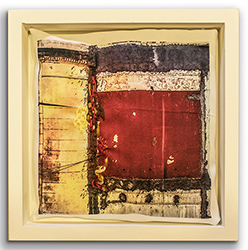 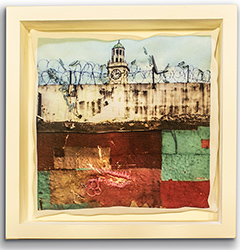 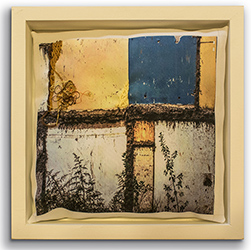 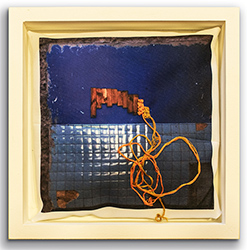 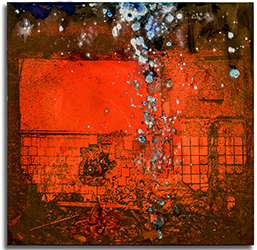 Residual spaces
"I was born in this multiple and compact city, used to oblivion and waste.
City of mutant objects, now they are birds.
(If there were no slits, there would be no hope).
Over here, made of cardboard, the city filtered silently"
Rita Simoni

I always had that sideways vision of the wanderer, that urban eye that slips through the cracks of the constructions seeking for other meanings in the interstices left by the everyday. The intimate in the open.

Symbol, trace, framework, chromatisms.
Open wounds, vestiges, fragments.
The private, deprived of its privacy....
Gaps that break urban continuity.
Other spaces,
Inhabited by whispers of vanished, elusive inhabitants.
Parenthesis.
The delayed moment of emptiness.
It is in these interstices that the uncertainty of space-time dwells.

Residual Spaces marks the beginning of a path, based on photographs of medians containing the imprint left by the demolition, which dialogue with full color taken from each wall, rescuing the geometry towards a possible abstraction. They manifest themselves in digital impressions.
Palimpsests that are manifested in digital prints of 100x50cm, framed with glass.

REMAINS (living room in a vacant lot)
This vision, at once creative and analytical, is understandable and logical in a current era which doesn't fit into a structuring time-space dimension. Our society no longer has a future conceived as a place of future happiness, a model to which we can aspire (as in the times of modernity) or as a past to commemorate with nostalgia. A present time without prolongation (the value of traditions has become aesthetic, emotional or recreational) and with a deficit in the representations of the future is - probably - destined to be lived as deconstructed. One could perhaps ask, as formulated by G. Lipovetsky, if the contemporary individual lives effectively in a state of temporary "weightlessness...
Lic. Danielle Perret
University of Geneva, researcher and independent curator

Intervention of a vacant lot within the layout of the former AU3, corner of Holmberg and Mendoza.
Held on October 24, 2010, the last possible day to do it, without knowing it.
A homely living space planted in one of the vacant highway. A sumptuous and worn blue armchair presides over an urban site on its pallet floor for a day. The Klein blue color, the color of the spiritual, the a-tectonic color, contrasts with the ruin. The installation becomes performance when it is circulated by people from the occupied houses of the neighborhood. The political reality wanted to be synchronous with this action: history marks in that week the lot occupation from another urban park, (the Indo-American), national census and the death of a former president.
Immediately the vacant lots in the area of ??the former UA.3 were fenced off.
The institutionality and real estate businesses reappropriated the layout, transforming its meaning into a space for use again.
Today, the emblematic photo of the Remains intervention is revived in a bar, Urban Bar, in another corner of the area now transformed: Donado and Sucre.
The turns of history, 11 years later.

RED
Photographs displaced to monochrome, printed on canvas and intervened with acrylic.
In the urban routes that I carried out for years in the area of the Ex AU.3, the highway that was not built, I found vestiges, objects and discarded marks of use, which configured disturbing scenes, whose backgrounds were always the product of the abandonment of the city deconstructed, placed in an indeterminate waiting situation.
The subsequent transformation of the image towards red and black accentuates its dramatic charge. Once printed, I intervened them with gestural paint in contrasting blues. One more layer of time, the presence of matter that is always a sign of the mutant present.

TIDES, 2021
Reformulation of "Residual spaces".
The works found in the atelier, printed on photographic paper mounted on an MDF structure, born in 2006, were completely transformed: the image of the dividing wall was sanded, which produces an effect of distancing and aging, in addition to a certain decomposition of the color of the Print.
The full color, becomes a tide of acrylic paint and cement, in several chromatic layers, reinforcing the idea of palimpsest. The image is a contrast between what fades as a memory, and the density of a present that ages rapidly. The Anthropocene becomes clear, with the devastating effects of human action on the planet.
The pandemic from 2020 produced an abrupt cut in the perception of time. The past is far behind, and the present has grown thick.

SOFT WALLS, 2021
The same photos of party walls taken (this time with a cell phone) in the permanent walks that I usually do around the city, in this case they became small-format works.
Printed on fabric, embroidered and padded, they become textile art in white wooden boxes.
The hardness of the wall softens on the canvas, the manual gesture of embroidery gives them a poetic and sensitive twist, a loving trait that rescues the finding of emptiness, and returns it to the body.

"URBAN ALQUIMIA"
Holding an exhibition in a bar is quite a challenge. A Café that invites you to enjoy the meetings, with a large influx of avid public at this time (almost post-pandemic) where going out into the world is not only a necessity, but urgency. The interior space is not very large; however the large windows link it with an exterior with a wide sidewalk, with a heated tent and a number of tables. The exhibition is carried out inside, in two columns rigorously prepared to hang work, separating table areas.

Besides, this bar is located in a renovated urban area of ??Buenos Aires, in Villa Urquiza.
There is a long history back, which possibly not everyone knows. At the time of the military dictatorship, entire plans were expropriated to build urban highways. The only one that did not take place was the AU3, now descent Donado from Gral. Paz Av., until the continuation towards Virrey del Pino St. During those years that part of the city was abandoned, with many vacant lots, some buildings still standing, a few occupied houses by homeless families, configuring a complex plot of different densities. The wastelands were left out in the open, filling with layers of urban debris, and the always resilient nature grewing in every possible crevice.
I used to walk around that area countless times, taking photos. I clarify that I am a persistent collector of urban archeology. Once I decided to carry out an intervention, for a whole day, with a blue velvet armchair and found objects. I did it just before the area was fenced off for its transformation into what we see today: a neighborhood of modern residential buildings of medium and uniform height, with wide sidewalk spaces and a high-level gastronomic commercial display.

Some of the original images and others that have become paintings and textiles, already material, are here, today, in Urban Café, a name that is empathetic to the series.
Pure alchemy, a reflection on our way of living.
Magically it is shown at another point on the same layout, a fact that gives enormous meaning to the works, at the turn of space and time, ready to be shared.