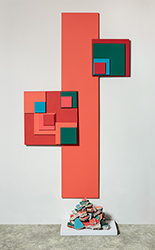 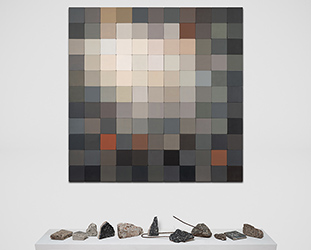 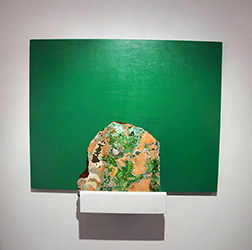 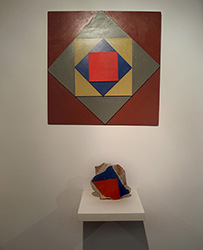 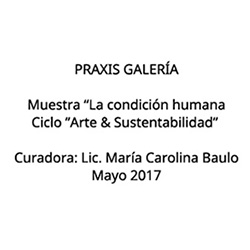 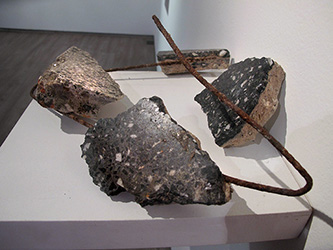 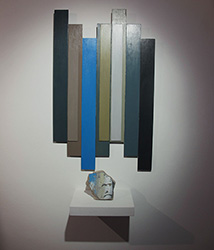 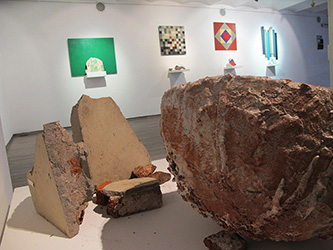 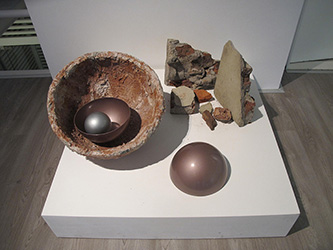 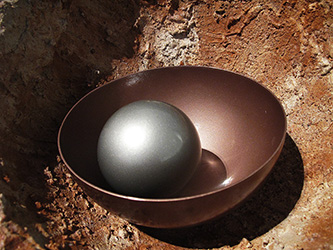 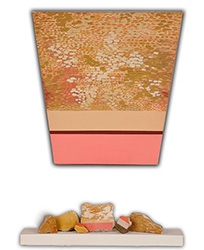 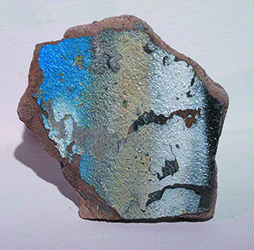 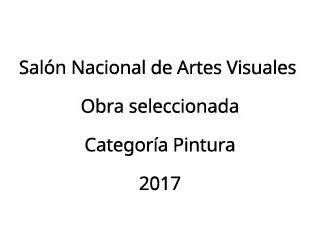 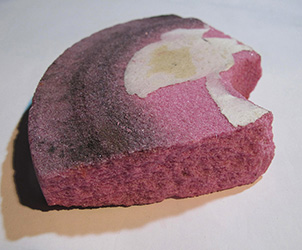 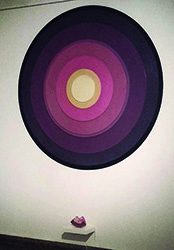 
Chromatic Archeology: Some rubble that I find in my daily walk still "beats", as if they were survivors. Color is "the living part" of the object, what I rescue to produce a counterpoint, a work which dialogues with the rubble, which remains in its original state, simply exposed on a white shelf as an archaeological remain. This is how, in this series "Chromatic Archeology", the diptych is formed. The new piece is a design that takes some or all of the tones of the original object, and has some formal bond with it. I make wooden reliefs in MDF painted with acrylic. There is a disorder-order relationship; chaos / entropy-design / new; history / past-present / future. Construction, demolition, reconstruction.

Chromatic Archaeology, 2017
On this occasion, the Art and Sustainability V cycle proposes to bring together a corpus of points of view that contemplate, far from all feasible obviousness, problems related to the man-environment relationship: they highlight a possible state of things, a scenario without humans as protagonists but present through the registry legacy in their works.

Photographs, objects, sculptures, installations, drawing and painting: a display of plastic and visual languages ??that project a panorama of the environment that contains us in a time -imaginary? - where the physical presence of the human hand is evident only because of the materiality of the works where we are faced with scenarios where life continues under other forms, where we realize the permanent capacity for resilience that lives in everything organic thing that surrounds us and that exceeds us in majestic quantities, in a world that persists and it will persist in spite of us. But also art holds "despite us" ...

Nestor Crovetto, Gabriel Rud, Rita Simoni, Sandra Ciccioli and Luciana Fernandez, make a personal journey, set a point of view, exercise an action that is common to all regarding concept and that has little of nostalgia, despair or transmitting a message whose purpose is to aware or make the viewer take conscience. If that happens, it is the product of empathy with the works and is only responsibility if the person who´s watching. Their works, intelligent, reflective, point a timeless time where the environment "survives" us as well as the works themselves, which resist our own self-destruction. Points of view that show that life re-edits itself and that the creative sensibility always leaves its mark.

Being man capable of generating and absorbing so much cruelty and so much love - many times in disproportionate quantities-, art is perhaps one of the most visceral and legitimate manifestations to give testimony of our human condition, its circumstances and its consequences.