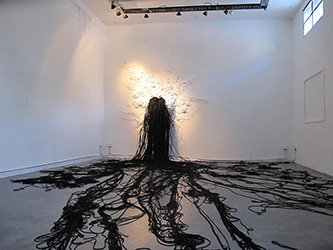 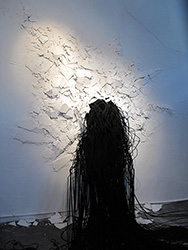 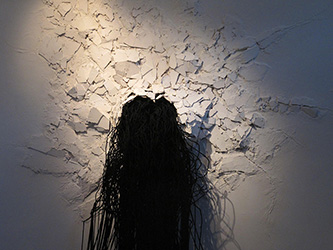 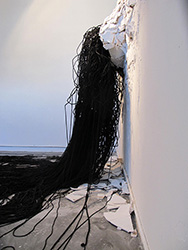 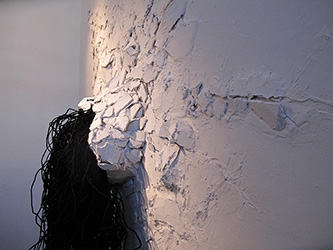 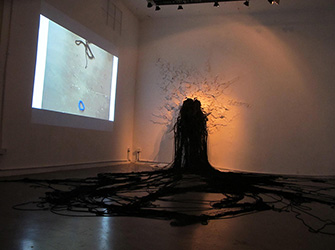 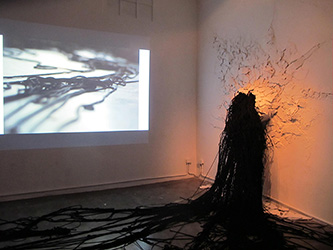 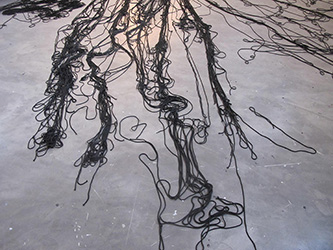 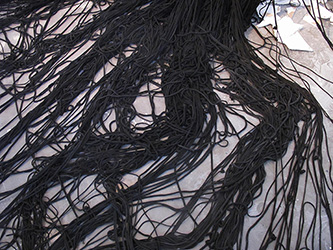 1. The walls limit. They fix a space. They limit their possibilities. There, objects receive a name. They acquire a form. They stabilize. The walls not only limit, they also contain. They enclose power. They hold the impulse of a body that struggles to explode. Black body, dark, confused, out of limit and form. A spectral presence that materializes. Pure strength. Energy that emerges, screams, stalks. Figure impossible to be dominated that concerns us requesting and disturbing us. Wherever the walls break, the open arises, the power. Our body becomes strange, the identity diffuse. The shadow of the other inhabits us. Enabling us towards new ways of thinking, moving the structures, destabilizing.
Magui Mastromarino, Curator

2. It seems to be about space. But it's about time.
Maybe this installation is not the trigger, but the convergence. Because when seeing this wall crossed, something happens, something related to the previous years, the years in which we created the idea that the walls are closed circuits, that what is built, what is constructed and stands, it´s a kind of unspoken perpetuity. Not like bodies. The living bodies are made to break. Day by day, they move towards an inexorable direction. Adolescents understand the idea of ??death before they even begin to suspect what the degradation of the body is about. How time undoes bodies.
Because the body is time.

Any viewer passing by, the most casual one sees the wall crossed that forms the installation and has a first feeling of discomfort. A beautiful discomfort, perhaps fascinating, but discomfort at last. Does it relate with the violence of observing an order that we assume unalterable in a state of chaos? Would this be how a body looks like at the exact moment when it is pierced by a bullet, or when a cells mutates and becomes a tumor? The film director Michelangelo Antonioni once said that a thing, a machine, for example, remains beautiful even when it is disassemble, unlike a body, which becomes a viscous and unpleasant mess. We will leave the reasons to anthropologists and philosophers.

This wall, however, is not any wall. It is traversed, still, but it isn´t the calmness of the inert, it´s the stillness of something that is happening, always, like a frame of a film: it isn´t a still, it´s a phrase that proposes a complete sequence in our imagination.

Then, the wall traversed captures the image of time that we don´t see, or better, it makes us enter an impossible and possible maze at the same time: the unfolding of time. The same time that will cause these words to be forgotten in minutes, the same time that will erase all memory of us when the last person who knew us in life has disappeared. The same time that, paradoxically, seems to be suspended when the installation is observed, because as Aristotle said with extreme mathematical complicity, "time is the measure of movement between two instants", something that doesn´t make any complex sense except in front of a work of art which finally achieves what any installation tries: playing with our senses, confusing and exchanging them, and in this particular case, this black body confronts us at a time within time, dilated or contracted; or perhaps, what it finally achieve is that any division between time and space becomes ridiculous and unnecessary, a concept that we can express in words and rarely find represented, except from time to time, when we come across an enigmatic black body.
Juan Manuel Candal

3. BLACK BODY, Installation Silvia Mildiner-Rita Simoni, by Gabriela Larrañaga
The artifice is a fundamental component of art, and the artist is committed through various operations and signals (increasingly getting far away from attempts of naturalness) to show that tacit communion between work and the exercise of perception. To rely on the spectator's complicity is also another code that sustains the contemporary artistic practice.

The visitors of alternative spaces of the local scene of the expanded arts are key characters and it's determining the way in which these actors relate with the current artistic experiences. As in this case with the intervention of this room at the Matienzo Cultural Center, empathize, disbelieve, feel a great bitterness, or merge in front of the effect of this materiality is fundamental in that sensory decoding that can even sweep us by the effects of that work that punches us. Feel affection or disaffection inevitably modifies the meaning.

This black body that bursts in, which appears as a vibrant image sketched out by the artists who once again occupy a space, this detained group action may be the result of the Rita Simoni and Silvia Mildiner interest shown in their work. They problematize around the dissolution of identities; perhaps this co-authorship implies an act of complicity, a sum of courage to delve into this performative act.

But why do they carve together that wall sustained by memories? Why do they work to expel that dark river from the wall? What about this old house, its rooms and what to say now about this crack that drips threads, awakening ghosts that slip through the spectators of some show or concert that takes place in the next room?

I'm a witness of this latency which irradiates, intimates, frightens. Two material universes exude a glossary of endless nighttime images. Just to name a few: a scream in a white cube, a mouth that vomits, the hairs of a spider, a creature that stops the eternal threads of history...

There's a body, and the artificial becomes a paradox.

4. A body before the body, by Debora Mauas

You must climb a long staircase, but already as part of the "Matienzo experience", known by those who use to go to the cultural center. What isn't often found in the Matienshon room is a shape that emerges by breaking the wall and spreads almost halfway. The text by Magdalena Mastromarino (curator of the show) tells us that it is "a black body"; nevertheless, that which challenges us, still lacks of a recognizable precision.

Remains of hair that comes from the other side of the room; frozen moment of a scream that trespasses the wall and bursts solidifying in this strange way; power of a movement that we perceive in an instant; a shaping information that unveils the instability of the body, of all the bodies?

This installation of the artists Silvia Mildiner and Rita Simoni calls our attention immediately. It seems to arise between us strangeness, a rejection perhaps, that despite all it brings us closer. Without precision we identify in it the remains of a shape which inhabits us, the power of an unknown cry that we possess, the force of a burst that we recognize.

Because this form that stopped before our eyes, seems to be the reverse of what we know as a body. A body before the body or a body within the body, or a part of it that acquires autonomy, showing how these forms in formation turns out to be the true protagonists.

In Black Body, the work, we, or that thing formed between both, and the space, create an experience which becomes performative (the lights and the rest of the empty room emphasize the experience), making the limits disappear for a while.