Becoming and going, site specific at a closed property to be demolished, 400m2., May / September 2016 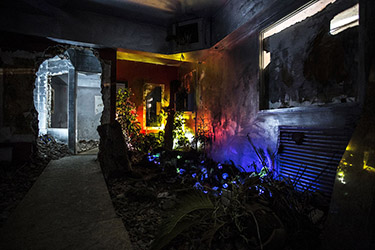 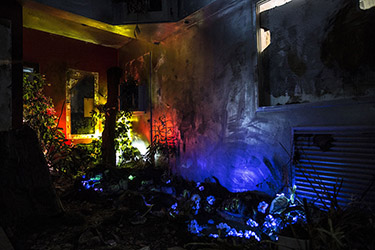 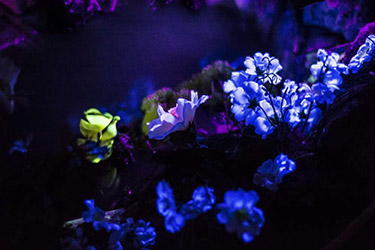 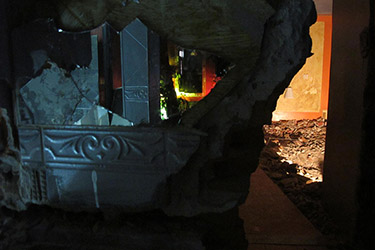 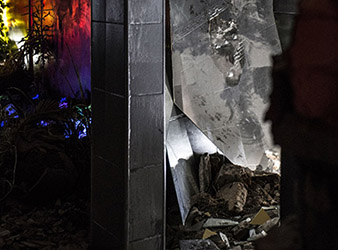 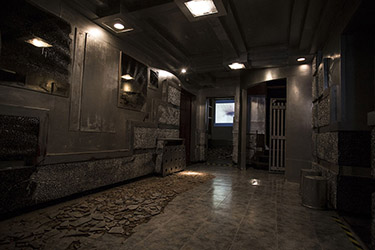 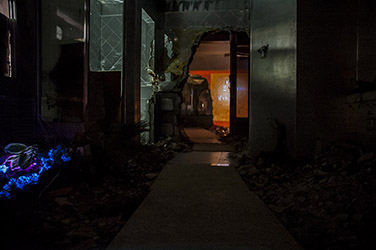 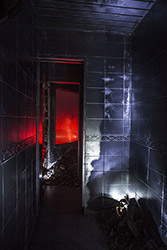 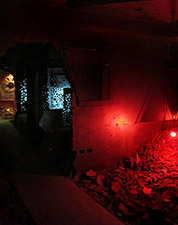 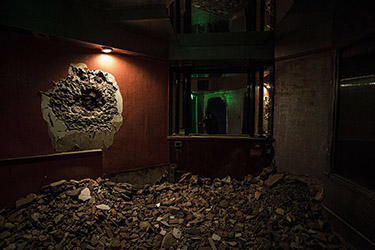 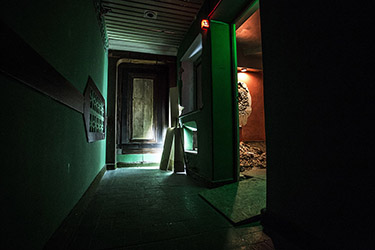 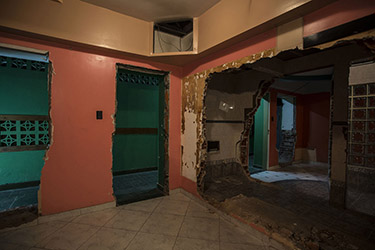 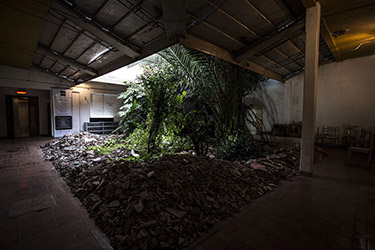 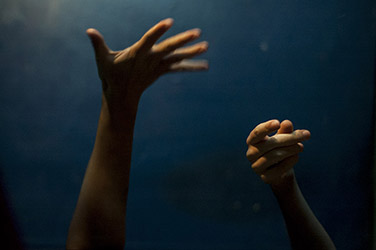 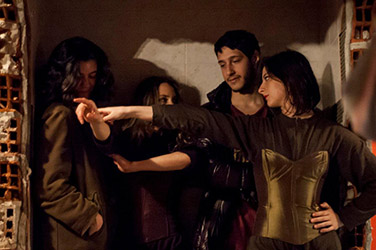 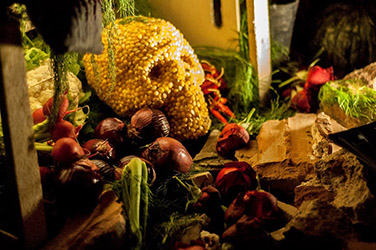 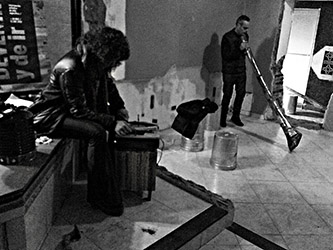 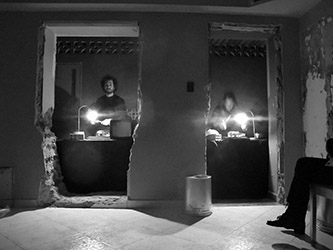 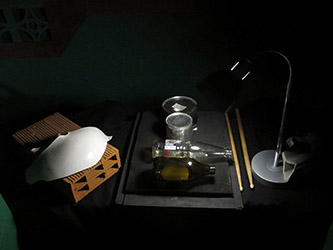 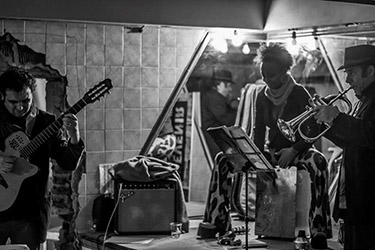 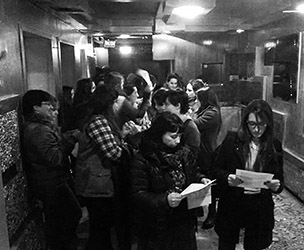 We are four.
Silvia Brewda, Ariela Naftal, Rut Rubinson and Rita Simoni.
Raw. For what it beats, for the vital.

We decided to create a collective and our first work came out with the impetus, the clarity and the imperative need to produce art. Also with the maturity which collaborates by going straight to the point, by not losing time. We invited Mariana Rodríguez Iglesias to "curate" our production. Then many more people joined the team.
The idea was, from the beginning, to look for a space outside the natural circuit of art, to be able to intervene it with total freedom. A property that was about to be demolished would guarantee that potential. We found it; they gave the place to us, allowing us to take advantage of it until the demolition and the new edification started.

An old motel, redoubt of marginal lovers in the neighborhood of Belgrano, opened its entrails to allow itself to be transformed, in the ritual process towards its inescapable demolition.

So we enter, with a thick marker in our hand, drawing on the walls, floors, spaces of intense colors, with a kitsch taste and a little wasted coating, our own site specific project. With the poetics of demolition the rooms became a journey, where the gaps in the walls linked what was previously enclosed in a transient privacy.
Ritual of a passage between one state and another, between past and future, the idea was to give an entity to the ungraspable present. BECOMING and going.

PATH: The thousands of spectators who visited the site specific what first met was the old hotel reception. Already from there, the mirrors that filled up building, dyed silver the walls and ceilings of the path, scarcely leaving any trace of the old colors and letting glimpse the varied textures. Silver that unified perception not to distract, to meet the essential, the experience.

SKIN: Next, the room of the video Skin, a work made by the Raw group: close-ups of our skins, breathing, alive, were beating imperceptibly. After contact with the body itself, the motto was to penetrate into the cavernous, demolished, silvery, and dark with illumination that highlighted the rubble-of the demolition itself- covering the floor.

WATER: The Vega stream flows a few meters away from there, which until some years ago used to flood the neighborhood. In a Buenos Aires that turned its back on the Rio de La Plata, which condemned the waters to oblivion and suffers its presence as a revenge of nature; in an Argentina that presumes to be European -as if it represented an indication of superiority- and forgets that half of the population has indigenous blood, remembering is a sign of health.
This is how the idea of ??water came up: a swamp as the origin that gave birth to life on the planet, but as a second vital opportunity before the imminence of a human cataclysm. This new life would be produced with the germ of what is left, of what remains. And in the motel there were: cloth flowers and plastic plants in pots, decorating corridors, stairs, and rooms. This entire found place in the lake created in there, in that darkened, cavernous interior, watered by phosphorescent lights, allowing me to create a strange, latent, mutant landscape. Between ruins and broken mirrors, with the smell of humidity.

GROUND: Ariela excavated the ground, also, to the depth. To trace like an archeologist of the impossible, the connection between that forgotten past and the presence of white strange beings, residual pieces with forms of inextricable meaning. Some magical transilluminated trail gleamed behind a door. A real map, like a storeroom where the pieces were located, marked the approach towards a possible deduction.

FIRE: After following the dark labyrinth indicated by luminous highlights, the spectator - researcher - glimpsed an intense red that accused its presence behind a translucent panel. Rut with his minimal gesture of a red light bulb, dyed the surrounding space of human presence, blood pulse, concept of the present body. Then the love that once existed there spread, creating a bridge to the future.

AIR: Immediately the wind, the pending, the ghostly of time, registering its sibilant step in Silvia's perforated papers. Taken to the space, suspended between an explosion of fragmented mirrors, they let themselves be pierced by beams of light that multiplied their framework towards infinity.

SOUND: The end is the beginning. The demolition still continues, in a sonorous way, marking a new human rhythm, of working men. Demolish to build. On the dividing wall, the continuation mark.

ACTIONS: Afterwards, the corridor, with its red numbers, the return to the real world, the jungle patio and the open Salon with demolished partitions but with their original colors. To give a celebration meaning to that other space and generate a permanent movement of people, we invited artists from other disciplines to make their own interventions in the space: musicians, performers, choreographers and dancers.

BECOMING and going was a Site Specific but also a dynamic body of interventions, of interactions, sounds, voices, skins, dances, rituals, open classes, meetings, people who circulated, experienced, come alive within the framework of an almost dematerialized architecture. Perhaps, many forms of art, all in one.